“A dog for all reasons!”

Gordon Setters originally evolved from the old setting spaniels and ‘black and fallow’ dogs are mentioned as early as the 17th century. However it was Alexander, 4th Duke of Gordon who seriously began breeding the black and tans at his castle at Fochabers in north-west Scotland and it is known that there were black and tan setters at Gordon Castle around 1825. The first Gordon Setter appeared at a dog show in Australia in 1865 and although they aren’t a particularly well known breed there are still a few dedicated breeders in most Australian states today.

The Gordon is a medium to large breed who was originally bred to hunt grouse and they are still used for this purpose today although they will readily hunt other game such as quail. They are the heaviest of the four setter breeds on a weight to height ratio and should look strong and sturdy in appearance. They are black in colour with tan points, but puppies will sometimes have a small white patch on the chest or neck which will diminish as they mature and usually disappear altogether. The coat is short on the body, but becomes longer on the ears, throat, chest, belly and tail and on the backs of the front and rear legs.

The dog’s coat will require regular brushing to ensure that it remains free of matts and tangles and some scissoring will be necessary on the throat, around the ears and on the feet to keep the dog tidy. It is important to ensure that the feet are kept trimmed especially between the toes otherwise the dog will tend to pick up mud and grass seeds.

Gordon Setters are generally free of any major health problems, but like most large breeds they can be prone to hip dysplasia and we recommend that all breeders x-ray their stock prior to breeding. There have also been a few instances of bloat within the breed.

The Gordon is an active breed that needs regular exercise, but they are usually quiet and sedate around the house providing their exercise requirements are met. Like all dogs they require training if they are to become a well adjusted and obedient family pet and it is recommended that new owners enrol their puppy in an obedience club as soon as it is old enough. In temperament Gordons can be a little aloof towards strangers, but they are extremely loyal and become very attached to their family which is perhaps why they tend to make better watch dogs than the other setter breeds. Overall Gordons are very intelligent and there are currently several who compete very successfully in obedience, field, agility, tracking, jumping and flyball as well as in the show ring.

They truly are a very versatile gundog! 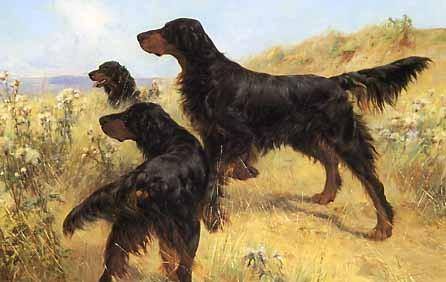 A Thomas Binks Image above